A new Chlorogomphus for Vietnam

Preparing to leave Vietnam in the spring and early summer of 2017 was difficult. So much to do still, so many riddles to solve. Late May I had the opportunity to go say goodbye to the Sa Pa area. I had now found a few good spots that were both rather pristine and just outside the National Park, so I could try without the guards looking over my shoulder to look for gomphids and chlorogomphids. On May 29 I worked my way down a slope and heavy brush to the small stream I knew was there inside the forest and stood there by the side of the stream for hours, amusing myself with many Anotogaster chaoi, but little else, until a large dragon fly by. I was able to catch it and stunned to see a large puzzling Chlorogomphid. Sadly it was a female and although it had some striking features, like colored wing bases and thin stripes between the larger ones on the side of the thorax, I could not connect it to a species. That is, until I saw photos of Chlorogomphus miyashitai Karube, 1995 in the bible of Haomiao Zhang on Chinese dragonflies. This properly set me on the path to identification. Chlorogomphus miyashitai was described in 1995 from 'Xien Khang' in northeastern Laos (Karube 1995). I think this refers to Xiang Khouang, a province in northeastern Laos, a region of high mountains, although the description has no other information on the habitat or the altitude of the type location. Haomiao Zhang reports it from the Pu'er region in Yunnan, where it occurs to 1500 m alt. The Laos Province is south of the Sa Pa region, but the Pu'er region borders the Vietnamese Lai Chau province and is thus not that far from Sa Pa. I caught my insect at approximately 1700 m alt. The dorsal pattern of S2, the pattern of the thorax and face, the wing coloration all point to Chlorogomphus miyashitai. Although not recorded from Vietnam previously, it fits well the known distribution, so its occurrence comes as no real surprise. 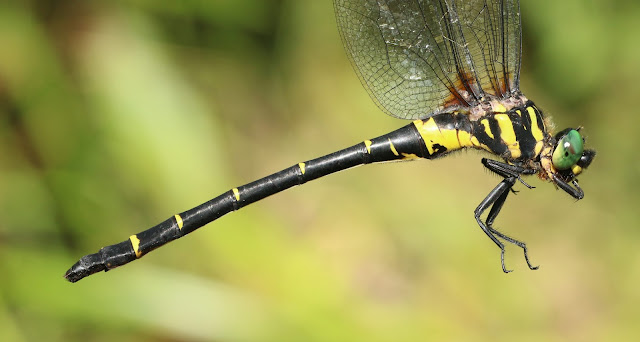 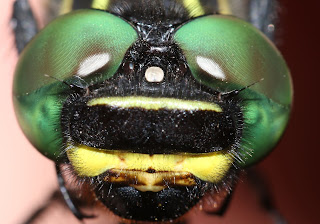 Face in frontal view
Posted by Tom Kompier at 05:00

Check out my field guide for REGUA

204 species covering all known from REGUA. A great introduction to the dragonfly biodiversity of South America